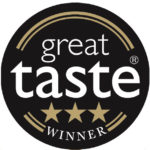 Great Taste is widely acknowledged as the most respected food accreditation scheme for artisan and speciality food producers.

Although very versatile, rapeseed oil is best enjoyed cold with home-baked bread, drizzled over a salad or used to make delicious dressings, dipping sauces or mayonnaise. Perfect with marinated vegetables, meat, fish and hummus. It can also be used for baking or in desserts such as flackjacks. Delicious on cabbage, beans and potatoes or literally anywhere you would want a fresher alternative to imported oils and to increase your plant based Omega intake.

Drumeen Farm is one of the oldest existing certified organic farms in Ireland where we grow, cold press and bottle our organic rapeseed and infused oils. We also cold press organic unrefined flaxseed oil on our family farm in Co. Kilkenny.

Ben and Charlotte Colchester were part of a small pioneering group way back before Organic Standards were even heard of here. They have been involved in the development, certification and promotion of organic farming for over 40 years. At one point the Organic Certification Body’s head quarter’s was based at Drumeen Farm. Their eldest child, Kitty Colchester, is the woman behind Second Nature Oils. She grew up immersed in the organic ethos.

Kitty’s mother, Charlotte, was almost constantly thinking about food. She grew her own fruit and vegetables, made her own bread, produced her own meat and dairy produce and had laying chickens. Practically nothing was bought in. Grapes, pears, plums, hazel nuts, peas, runner beans, beetroots, asparagus, cucumbers among many other produce all came fresh from the garden, dug or picked only moments before being turned into a delicious, wholesome and healthy meal. Food was 100% traceable and fresh where Kitty grew up …. really traceable and really fresh!

The connection between the health of the environment, the soil, the animal, the plant and the human was taught to Kitty & her siblings the same way they were taught math and English spelling.

In 2006, Ben and Charlotte bought an oilseed press specifically designed to press a high quality culinary oil fresh for the house and to expel rape meal for their livestock. At that time Kitty was working in refugee and food camps in Ethiopia, where the importance of sustainable food production is most prominently evident.

Kitty decided on moving back to the family farm having been away for nearly two decades to start a sustainable food enterprise. At the time, culinary rapeseed oil wasn’t being produced in the Republic of Ireland. It hadn’t really been heard of here at that time. Now there are many conventional oils on the Irish market, but Second Nature still produces Ireland’s only premium organic cold pressed rapeseed oil.

All Ireland Foods All Rights Reserved

This website uses cookies to improve your experience while you navigate through the website. Out of these cookies, the cookies that are categorized as necessary are stored on your browser as they are essential for the working of basic functionalities of the website. We also use third-party cookies that help us analyze and understand how you use this website. These cookies will be stored in your browser only with your consent. You also have the option to opt-out of these cookies. But opting out of some of these cookies may have an effect on your browsing experience.
Necessary Always Enabled
Necessary cookies are absolutely essential for the website to function properly. This category only includes cookies that ensures basic functionalities and security features of the website. These cookies do not store any personal information.
Non-necessary
Any cookies that may not be particularly necessary for the website to function and is used specifically to collect user personal data via analytics, ads, other embedded contents are termed as non-necessary cookies. It is mandatory to procure user consent prior to running these cookies on your website.
SAVE & ACCEPT